The resolution was presented by Left Union spokesperson Valentin Mateo who briefly introduced the incentives and consequences of the first Genocide of the 20th century and stressed the need for recognition and condemnation. The six parties representing the City Council unanimously voted in favor of the resolution and acknowledged that the crime perpetrated by the Ottoman Empire was genocide.

On April 17, 2015 the Basque Parliament condemned the ‘terrible’ crime of the Armenian Genocide, demanded Turkey to recognize it and called for ‘reconciliation between the two countries based on shared history.’ The Parliament has also called for ‘transparent and sincere dialogue’ between Turks and Armenians to ‘build a common future, which will close this tragic chapter of history’ for which understanding, recognition and justice are substantial.

In June 2014, the Spanish autonomous Navarre region‘s parliament recognized the Armenian Genocide. Navarre’s parliament adopted a declaration condemning the Turkish regime’s policy and calling on Turkey to establish diplomatic relations with Armenia in line with good neighborly relations and peaceful settlement of the border issue. The document also states that given the status of Turkey as a EU candidate, these two issues need immediate solutions.

The fact of the Genocide has also been recognized by Catalonia and the Balearic Islands, 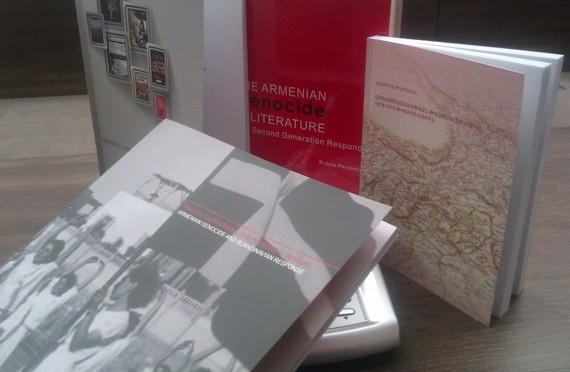 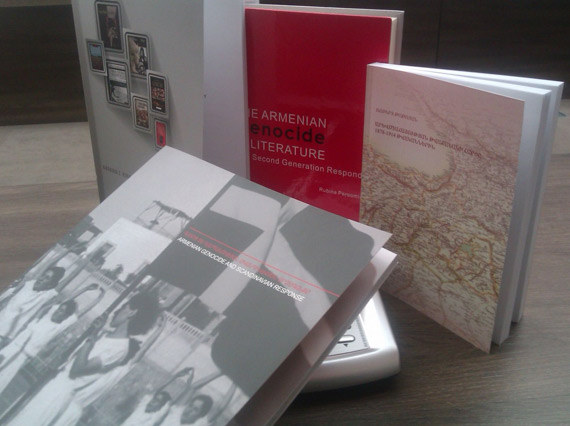 Based on the material gathered the author divided the book into chapters which are representing conceptual and factual aspects of the Armenian Genocide beginning from the origins of the Armenian Question.

The book consists of 16 chapters, list of encyclopedias, a bibliography of a literature related to the Armenian Genocide from different encyclopedias.

Robert Tatoyan presented the monograph entitled “The question of Western Armenian population in 1878-1914.” According to him, this is one of the most controversial issues because Turkey’s modern historiography and authorities are denying the Armenian Genocide on the basis of the Ottoman Empire statistics, which claims 1,300,000 Armenians there.

“I tried to analyze the data by the two major bodies available – the Ottoman Empire and the Constantinople-based Armenian Patriarchate, which has a right to registration,” he said.

Mr Demoyan presented an English-language book entitled “The Armenian Genocide in Literature. Perceptions of Those Who Lived Through the Years of Calamity” by Rubina Peroomian, a research fellow at the University of California.

“The author addresses the second generation’s response to the Armenian Genocide in literature, which reflects people’s psychological approaches.” 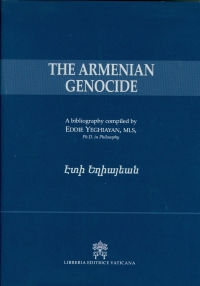 (horizonweekly.ca) Eddie Yeghiayan’s recently published collection of works dealing with the Armenian Genocide surpasses all previous bibliographies on the subject in both scope and ambition. Encompassing various forms of media in a multitude of languages and stretching at over a thousand pages, it is massive, yet meticulously catalogued and comprehensive volume. The bibliography will aid experts working across many academic fields and disciplines in their study of the Armenian Genocide and will undoubtedly serve as the standard reference work in the years to come.

The Tome. A Project that Hits Close to Home:

Eddie Yeghiayan is the brother of Vartkes Yeghiayan, the Los Angeles-based attorney who in recent years has filed several lawsuits for Armenian Genocide restitution, and the son of Boghos Kevorkian-Yeghiayan (1905-1962) from Sparta, near Konia, and Aroussiag Terzian (1915-2003), both survivors of the Armenian Genocide who settled in Ethiopia. It was in this African Armenian diasporic community that Eddie and his brother Vartkes were born.

Eddie Yeghiayan was born in Addis Ababa, Ethiopia, on September 23, 1940. He began his secondary education at the American Academy in Larnaca, Cyprus, but was obliged to leave in 1956 in the middle of civil war while the island was still under British occupation. He relocated to California, where he received his high school diploma from Berkeley High school in 1959 and later received a Bachelor’s Degree from the University of California, Berkeley in 1963. He then continued his education at the San Francisco State University, where he received an MA Degree in 1967and completed a second Master’s Degree at UC Berkeley in Library Science (MLS) in 1977. By then he had already completed his Ph.D. in philosophy in 1974 from the University of California, Irvine.

After a two year stint as an instructor of philosophy and religion at San Mateo College from 1972 to 1974, he returned to UC Irvine to assume a position as a Librarian. He worked in that capacity from 1974 to 2004, when he retired. During his tenure at Irvine Yeghiayan put together the bibliographies of a number of leading contemporary intellectual luminaries and philosophers, including Edward Said, Wolfgang Iser, Judith Butler, Willard Van Orman Quine, and Jean-François Lyotard, to name just a few.

(One can learn more about the bibliographies he has put together by clicking on the following link: http://www.uv.es/~fores/programa/yeghiayan.html).

Given his background, it perhaps should come as no surprise that Yeghiayan would have chosen to tackle on the subject as large in scope as the Armenian Genocide. The tome is divided into eight chapters, which are categorized thusly.

Chapter One is devoted to the bibliographic citation of books and articles published in periodicals and academic and specialized journals. It covers some 560 pages and contains 4312 entries.

Chapter Two is devoted to newspapers. It covers the period from 1833 to 2011. It consists of some 230 pages and covers all aspects of the Armenian question as part of the Eastern Question of the Ottoman Empire. The interesting thing about this chapter is that the entries are assorted chronologically. If we take the average number of entries as 18 per page, then this section contains 4,140 entries more or less, which makes it a huge repository on the subject matter.

Chapter Three includes items regarding the Armenian Genocide in journals and magazines. It covers the period from 1823 to 2011 and spans some 210 pages. Here again if we take the average number of entries per page we end up with approximately 1,890 entries.

Chapter Four is devoted to works of fiction, poetry, drama, and subject matter.

The fifth chapter consists not only of doctoral dissertations and masters’ theses, but also undergraduate senior theses relating to the massacres. There are approximately 145 such entries.

Chapter Seven is solely dedicated to archival sources. It is a complete list including collections that have microfilms or microfiches, as well as repositories where the physical presence is required to conduct research.

Finally, in Chapter Eight, Yeghiayan familiarizes us with electronic and internet resources available on the Armenian Genocide.

With this publication, Yeghiayan has presented to us the most complete reference work on the subject of the Armenian Genocide and the Armenian Question. It is an important tool that universities and libraries should be quick to stock up on.

It is significant to note that this bibliography was published by the Vatican and was, in fact, formally presented to Pope Francis I and to delegates attending the centenary commemoration of the Armenian Genocide in Vatican City during the middle part of April. The bibliography is up to date to 2012, although there is talk of publishing a compendium volume that includes references to all works that have appeared until the middle part of this year. There is also word that a searchable PDF format of the book is being prepared on compact disc. This reviewer has been informed that attorney Vartkes Yeghiayan’s office has taken upon itself to update the compilation electronically on an annual basis and aided in the effort by Armen Manuk-Khaloyan, the law office historian. Continuing Eddie Yeghiayan’s work and bringing it in line with the digital age is a very important endeavor and his work is a welcome and timely contribution to the literature of the Armenian Genocide. Mr. Yeghiayan should be commended for his efforts…