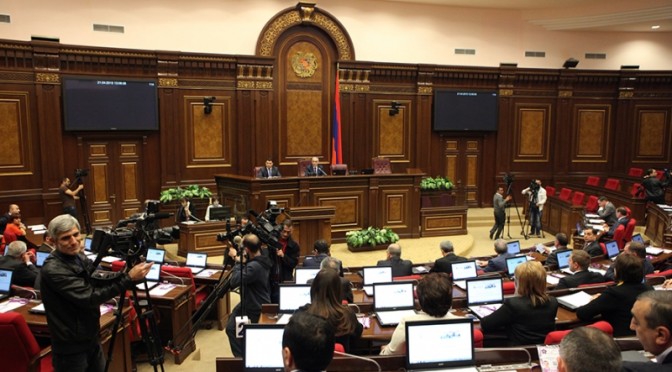 The draft statement was unanimously adopted with 113 votes.

Below we present the text of the RA NA Statement:

“The National Assembly of the Republic of Armenia

– having regard to the Convention for the Prevention and Punishment of the Crime of the Genocide adopted by the United Nations General Assembly on 9 December 1948, the law on the Condemnation of the 1915 Genocide of the Armenians in Ottoman Turkey adopted by the ArmSSR Supreme Council on 22 November 1988;

– evaluating the provisions stipulated in the All-Armenian Declaration of the Armenian Genocide Centennial,

– highlighting the contribution of the Armenian people to the joint efforts of the international community aimed at crimes against mankind, condemnation and prevention of genocides,

Calls on the parliaments of all countries, inter-parliamentary organizations and international organizations to officially recognize and condemn the Armenian Genocide perpetrated by the Ottoman Empire as a gravest crime against mankind.

Exhausting the agenda, the parliament ended the work of the extraordinary sitting.