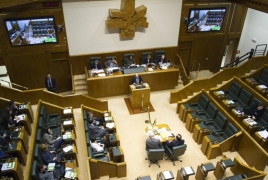 (panarmenian.net) – The Parliament of the Basque Country condemned the Armenian Genocide and urged Turkey for recognition. It also called for peace between Armenia and Turkey, stressing the need for the latter to face its own history.

The parliament-adopted statement expressed solidarity and respect for the families of the Genocide victims who to this day suffer repercussions of the tragedy, Abc.es reports.

The parliament called for a transparent dialogue between Armenia and Turkey for a better future which can become a possibility through justice, understanding and recognition.

The Basque Parliament first recognised the Armenian Genocide with its April 20, 2007 declaration.