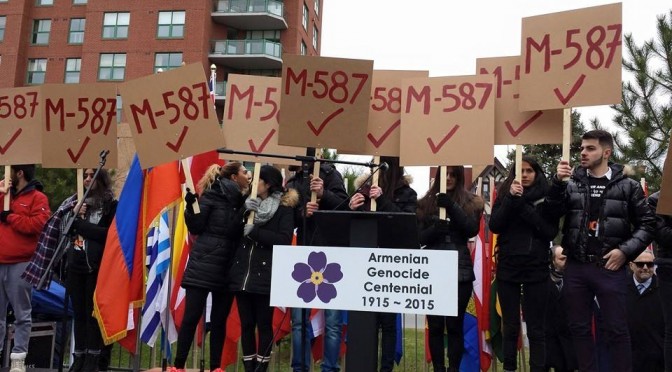 (newswire.ca) OTTAWA, April 24, 2015 /CNW/ – The Canadian Parliament unanimously adopted Motion M-587 today. This important motion calls on this and subsequent governments to honor the victims of all genocides by recognizing the month of April as Genocide Remembrance, Condemnation and Prevention Month. Brad Butt (C-Mississauga-Streetsville) presented this motion on March 25.

“The government of Canada is proud to support Conservative MP Brad Butt’s private members motion M-587,” Defence Minister Jason Kenney said today. Mr. Butt himself went on to say that he joins “…thousands of people in recognizing the 100th anniversary of the Armenian genocide. We must never forget what happened then and we must always work to ensure these tragic events never happen again.” On behalf of the NDP, who also supported the motion, Alexandre Boulerice said that “the month of April is an important time to re-commit ourselves to protecting human rights and dignity for all people around the world.”

Very close collaboration between Jewish, Tutsi, Ukrainian, and Armenian organizations was instrumental in securing quick passage of Motion M-587 by the Canadian Parliament. All political parties united behind this motion, and its adoption is even more meaningful as it comes on April 24, 2015, the centennial of the Armenian Genocide. Canada has once again demonstrated that it is an international leader in human rights advocacy, and is uniquely placed to take this important step towards ensuring a more humane world for future generations.

“The adoption of M-587 on today’s centennial is an important message to all perpetrators of genocide, and especially Turkey, that all Canadians stand together in condemning heinous acts such as the Armenian Genocide,” stated Mher Karakashian, chair of the Armenian Genocide Centennial Committee of Canada.

This motion will serve to honour those who lost their lives, and empower those working to rid the world of such deliberately executed crimes. NEVER AGAIN should be a standard that we are all held to. Preventing genocide is the personal responsibility of every individual around the world.