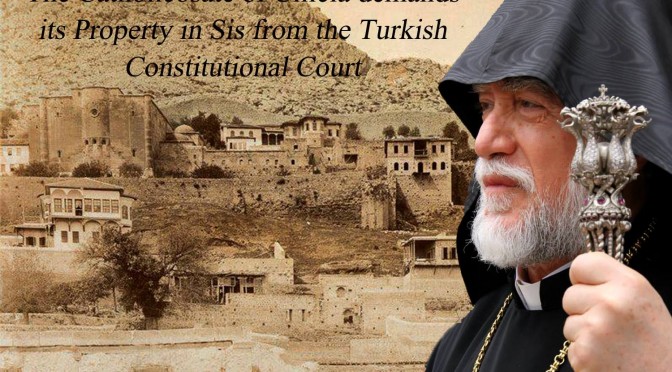 (armenianorthodoxchurch.org) On Tuesday 28 April 2015, the attorney of the Catholicosate of Cilicia in Turkey submitted a brief to the Constitutional Court in Turkey, requesting the return of its Centre in Sis (Kozan).

Convinced that recognition of the Genocide and compensation should go together, His Holiness Aram I, on the year of the 100th anniversary commemoration of the Armenian Genocide of 1915, has filed a lawsuit at the Turkish Constitutional Court for the return of the Spiritual Centre of the Catholicosate in Sis. In initiating this effort, His Holiness is setting a precedent for the descendants of the martyrs to reclaim their family belongings.

Since 2012, His Holiness Aram I has presided over a committee of Turkish and international human rights lawyers, preparing the current litigation. The committee will explain the lawsuit through two press conferences. The first will be held on Wednesday 29 April in Washington DC and the second soon after in Geneva.

The Catholicosate of Cilicia settled in Sis, the former capital of the Cilician Kindgom, in1295, after moving from several places due to the political uncertainties in the region. In 1921, following the 1915 Genocide, the Ottoman authorities ordered Catholicos Sahak II Khabayan and the clergy to vacate the location within two days. The Catholicos and the clergy left the monastery in Sis, taking with them very few objects, such as the basin pot for the preparation of the holy muron, some manuscripts and liturgical items. After moving between Jerusalem, Aleppo, Damascus and Cyprus, in 1930 the Catholicosate settled in Antelias.

Secretariat of the Catholicosate of Cilicia

WASHINGTON, DC – Leaders and lawyers representing the Catholicosate of Cilicia held a press conference earlier on April 29, 2015 at the National Press Club to discuss their lawsuit against the Turkish Government seeking the return of the historic seat of the Catholicosate, located in Sis (currently Kozan), one-time capital of Cilician Armenia, reported the Armenian National Committee of America (ANCA).

The press conference featured remarks by Archbishop Oshagan Choloyan, Prelate of the Armenian Apostolic Church of the Eastern United States; Teny Pirri-Simonian, Senior Advisor to the Armenian Catholicosate of Cilicia; Payam Akhavan, former UN prosecutor at The Hague and lead international counsel in this case, and; Cem Sofuoglu, Turkish human rights lawyer and local counsel. They were joined by ANCA Executive Director Aram Hamparian, who shared the Armenian American community’s support for the just legal claims of the Armenian Church and, more broadly, spoke to the efforts of Armenians worldwide to secure international justice for the Armenian Genocide.

In his remarks, Archbishop Choloyan reviewed the spiritual history of the Sis Catholicosate, noting the central role it played in Armenian religious life until the Armenian Genocide of 1915. “We are,” said the Archbishop, “asking for the return of our land in order to worship there – as we did for a 1000 years. I know that the land is ours. I know that the land recognizes her master.”

In her comments, Pirri-Simonian reviewed the history of this legal case, highlighting the leadership of His Holiness Aram I in convening conferences and consulting with international legal experts to prepare a compelling legal case for the return of the Sis Catholicosate. She underscored His Holiness Aram I’s commitment to convey “more than memory” to coming generations, by securing – in very concrete ways – the return of the Armenian nation’s spiritual heritage.

Lead attorney Akhavan emphasized that: “This case really is about translating the demand for justice into a very concrete case – and that case is the return to the Catholicosate of the Holy See of Cilicia of its historical seat in present day Kozan.” He added that: “It is a concrete demand for the return of property based on the rights of the Catholicosate, the legal personality of which was never extinguished, and it is about the right of religious worship. As someone who is not Armenian but who stands in solidarity with the struggle of the Armenians for justice, this is a remarkable story of hope; it is a remarkable story of the resilience of the human spirit 100 years after these abominable acts that there is still the hope to return.”

Akhavan explained that: “From 1915 onward, Turkey adopted a series of laws on abandoned properties – and of course, abandoned properties is a euphemism used to confiscate the properties of millions of Armenians that once were inhabitants of Ottoman Turkey. Under the 1923 Treaty of Lausanne, the Republic of Turkey undertook under international law to respect the rights of what was termed, under the treaty, non-Muslim minorities.” He added that: “The laws on abandoned properties were designed to deny the Armenians the right to reclaim their properties. In addition, given the tremendous religious significance of this property, the denial of the property rights in this relation also implicates the right of Turkey’s Christian minority, in this case the extended minority that exists in much smaller numbers in Turkey, to freely worship.” Commenting on the legal prospects of the case, Akhavan voiced his “sincere hope that this case will succeed before the Turkish Constitutional Court, failing which the Catholicosate has announced its intention to appeal any adverse judgment to the European Court of Human Rights in Strasbourg.”

Local counsel Sofuoglu pointed out the ground-breaking nature of the case, noting that: “The case I filed on Monday is the first property case of this nature – the returning of religious properties to their original owners.” He also fielded questions from the press about the legal details of the case in the context of Turkey’s legal system.

Hamparian noted that the Armenian Church’s case is a strong one that will prevail on its own merits, while also sharing insights regarding the broader meaning of efforts to secure the rightful return of Armenian religious properties: “The restoration of the Catholicosate of Sis would,” he stressed, “represent an act of justice, a first step toward the legal return of the Armenian Church and its faithful to their lawful place in their rightful homeland. It would, as well, mark a meaningful milestone in the Armenian nation’s journey toward a just resolution of the Armenian Genocide.”

Congressman Adam Schiff (D-CA) welcomed the case, noting, “I applaud the lawsuit filed in Turkish court to regain ownership of the Catholicosate of the Great House of Cilcia which was confiscated during the Armenian Genocide. This ancient and sacred site must be returned to its rightful owners nearly a century after it was pillaged by the Ottoman Empire. Armenians are right to pursue all legal avenues to obtain justice and to seek the return of what is rightfully theirs.”

The Catholicosate’s St. Sophia church and monastery, and their surrounding lands, are located in the city of Kozan, in the Adana Province of the present-day Republic of Turkey. This headquarters, a center of Armenian religious life for more than seven centuries, was illegally stolen by the Turkish Government during the Armenian Genocide.

Click here to learn more about the historic significance of the Catholicosate of Cilicia headquarters in Sis.