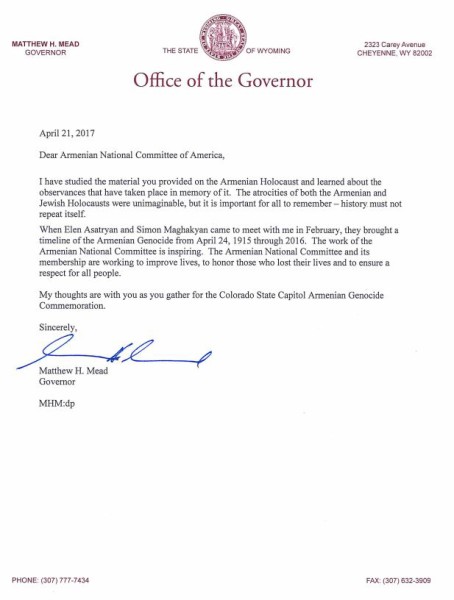 “The atrocities of both the Armenian and Jewish Holocausts were unimaginable,” reads Governor Mead’s letter, “but it is important for all to remember – history must not repeat itself.” The letter also recalls a meeting with senior ANCA-WR staff earlier this year, when Executive Director Elen Asatryan and Community Development Coordinator Simon Maghakyan visited Cheyenne, adding that “The work of the Armenian National Committee is inspiring.” Referencing the upcoming April 23 commemoration in Denver, Governor Mead concludes his letter with, “My thoughts are with you as you gather for the Colorado State Capitol Armenian Genocide Commemoration.” The full letter is here.

“We thank the Governor of the Great State of Wyoming for standing on the right side of history and adding his voice to the ongoing need to recognize and commemorate the Armenian Genocide,” remarked ANCA-WR Chair Nora Hovsepian. “This recognition is a tribute to the memory of our ancestors and a celebration of the brave work of many Wyomingites who supported the national Near East Relief effort of building and operating 400 orphanages for over 132,000 Armenian children who survived the genocide. Last but not least, this recognition is a testament to the tireless work of our grassroots activists and dedicated staff,” continued Hovsepian.

The news of Wyoming’s recognition of the Armenian Genocide also received praise by elected officials and activists in the Equality State. “I congratulate the Governor for his courageous stance on this moral issue amid lavish anti-Armenian lobbying in Wyoming, which has included all-inclusive junkets to the dictatorship of Azerbaijan by legislators across our nation, who should know better than hobnobbing with bloody dictators that behead Christian Armenians and destroy ancient Armenian churches and Djulfa cross-stones,” remarked Wyoming State Senator Anthony Bouchard. “The Armenian Genocide is an unpunished crime that needs to be recognized and accounted for; Turkey’s ongoing denial of this grave crime, illegal blockade of Armenia and support for Azerbaijan’s genocidal policies against Armenia and Artsakh must end,” continued Sen. Bouchard.

Today’s victory comes after the ANCA-Western Region team drove down from Denver Colorado to the Equality State on the 29th of January and spent the day meeting with senators and representatives to educate them about the Armenian Genocide, Artsakh, the Armenian community, and discuss Armenian-American priorities. During the visit, Senator Bouchard, who during his recent election campaign connected with the ANCA-WR about his opponent’s junket to Azerbaijan and spoke forcefully against these dirty tactics on the campaign trail, welcomed the ANCA-WR team by connecting them to the Governor’s office and other elected officials. Before the sun rose the next morning, joined by the Chair of the State Revenue Committee Ray Peterson, the ANCA-WR met with the Governor and discussed, among other topics, the heroic efforts of Wyomingites during the Genocide, Turkey’s continued denial of the mass murder of 1.5 million Christian Armenians and the need for proper recognition, restitution and reparations against this unpunished crime against humanity.

“We extend our deep gratitude to Governor Mead, Senators Bouchard and Peterson, and the elected leaders for their leadership, taking the time to learn about Armenian American issues and supporting the Armenian community of Wyoming and the entire United States, as well as standing by the world’s first Christian nation as it continues to address the ongoing security and economic consequences of the Armenian Genocide,” remarked Executive Director Elen Asatryan.

For a complete list of the 45 states that have recognized the Armenian Genocide, visit: https://anca.org/us-genocide-recognition/