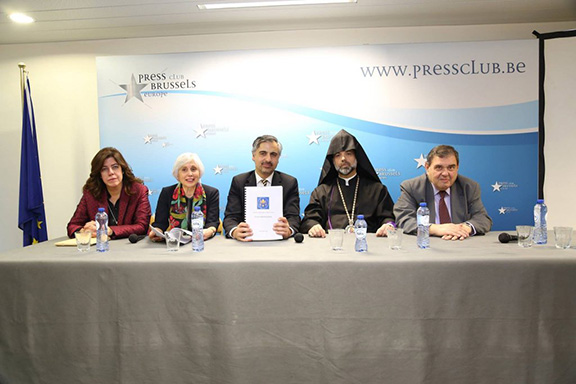 (source: EAFJD press release, ARMENIAN WEEKLY) On December 7, the Armenian Catholicosate of Cilicia officially filed the application to reclaim the historical headquarters of the Holy See of the Great House of Cilicia from Turkey to the European Court of Human Rights (ECHR).

In his opening remarks EAFJD President Kaspar Karampetian highlighted the importance of the Catholicosate’s initiative which he mentioned is a crystal clear indication that the Armenian Cause has moved from the stage of recognition to that of demand for reparation. Furthermore Karampetian pointed out that the fact of the press conference taking place in Brussels, the administrative center of the European Union, proves that the Armenian nation pursues its lawful rights to supreme tribunals.

Catholicos Aram I in his message that was conveyed by Archbishop Khatcherian called the legal action against Turkey historical since it comes a 100 years after the Genocide of the Armenians.

Akhavan said that the case was inspired by the 2011 conciliatory remarks made by the Turkish government, which invited religious minorities to return to Turkey. These comments encouraged Aram I to send a letter in 2011 and 2013 demanding to return the estates of the Sis Catholicosate, however the letters remained unanswered.

A case was then filed to the Constitutional Court of Turkey, however the court decided not to proceed with the case and banned the church from having access to property records. Pakhavan explained how the current status of the property was just a pile of rubble, but if given under the right ownership, could become a cultural attraction and a center for religious worship in the Middle East. “Anticipation will take several months. We have waited 100 years, and are willing to wait several months more for justice,” said Pakhavan.

Dr. Nora Bayrakdarian spoke about the procedure of the case and underlined that the Armenian Genocide is an indisputable fact adding that Turkey must confront its past, an urge that is also included in the relevant resolutions adopted by the European Parliament and European states.

Meanwhile, Dr. Pirri-Simonian addressed two significant attributions of the case, which included its value of promoting multiculturalism and inter-religious dialogue in the Middle East and encouraging Islamized Armenians to come forward and reveal who they are.

Following the remarks by the distinguished speakers, a variety of questions were asked regarding the precedence the case can set for other minorities; whether this will contribute to the political game between the European Union and Turkey; and if the council was prepared to accept a ruling from the court that did not fully comply with their expectations.

Pakhavan said that given their arguments, he would be very surprised if the court denied the right to the possession and use of the property. “The main claim is property rights under Article 1 of Protocol 1 to the European Convention and the supplementary claim is to the right of religious worship… I would be very surprised if the European Court of Human Rights would say that we are going to deny the right of the Christian minority, which has specific rights under the Lausanne treaty to go to a place of worship,” said Pakhavan.

Several other factors, including the current election going on for a Patriarchate in Istanbul, details into property rights, and the lasting impact it could have in the Middle East were discussed as well.

The press conference was live streamed on the EAFJD and Cilicia TV facebook pages which viewers used in order to address their questions online.